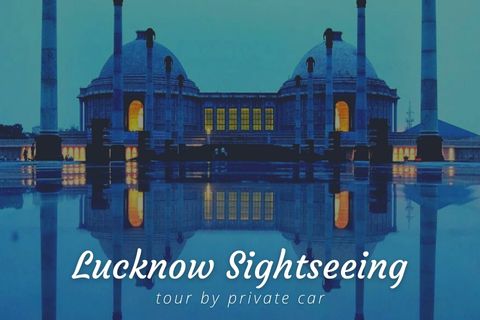 Lucknow, the state capital of Uttar Pradesh, is situated along the banks of the Gomti River and has a great history of culture, art, poetry, music, and food. The vibrant city is a special fusion of the ancient and the modern, famously known for its Nawabi era elegance and exquisite cuisine. It has remarkable monuments that showcase an intriguing blend of ancient, colonial, and oriental architecture. You can book our Lucknow Darshan Packages to explore the city’s world-renowned literature, gastronomy, performing arts, and Tehzeeb.

Imambara, Rumi Darwaza, Kaiserbagh Heritage Zone, Residency, and Dilkusha are just a few of the outstanding architectural landmarks that the city has to offer. Apart from literature and architecture, in terms of fashion, Lucknow has become known for its chikan embroidery and zardozi. The city offers a spread of scrumptious cuisine including delicious Kebabs and Biryani among other things, which alone is enough reason for you to visit.

The city is a perfect destination to enjoy a regal holiday with your loved ones. You can plan a trip with your family and friends or explore the city alone on a solo trip. Holidays DNA has curated a list of sightseeing places to choose from and also provides details of local cab vendors in our Lucknow Darshan Packages.

Based on your interest and needs, you can customize the Lucknow Darshan Package. You can pick the places you wish to visit and even book a stay in the heritage city with our Lucknow tour packages with a stay and hotel. The packages come with a cab service from reliable cab vendors from Lucknow. They ensure your comfort and safety as you visit the sightseeing places in Lucknow.

Here is a list of places in Lucknow you can visit with our Lucknow Darshan Packages:

Bara Imambara also known as Asfi Imambara is also named after Asaf-ud-Daula, the then Nawab of Lucknow. It is a destination of religious, historical, and architectural significance. It is a magnificent example of Mughal architecture and is believed to be the largest structure in the world not supported by beams, and is regarded as a marvel of engineering. There is an impressive maze on the upper floor of the monument, known locally as Bhul Bhulaiya. It is the main draw of the Imambara. At the center of the structure, you will find the grave of the Nawab and his crown. 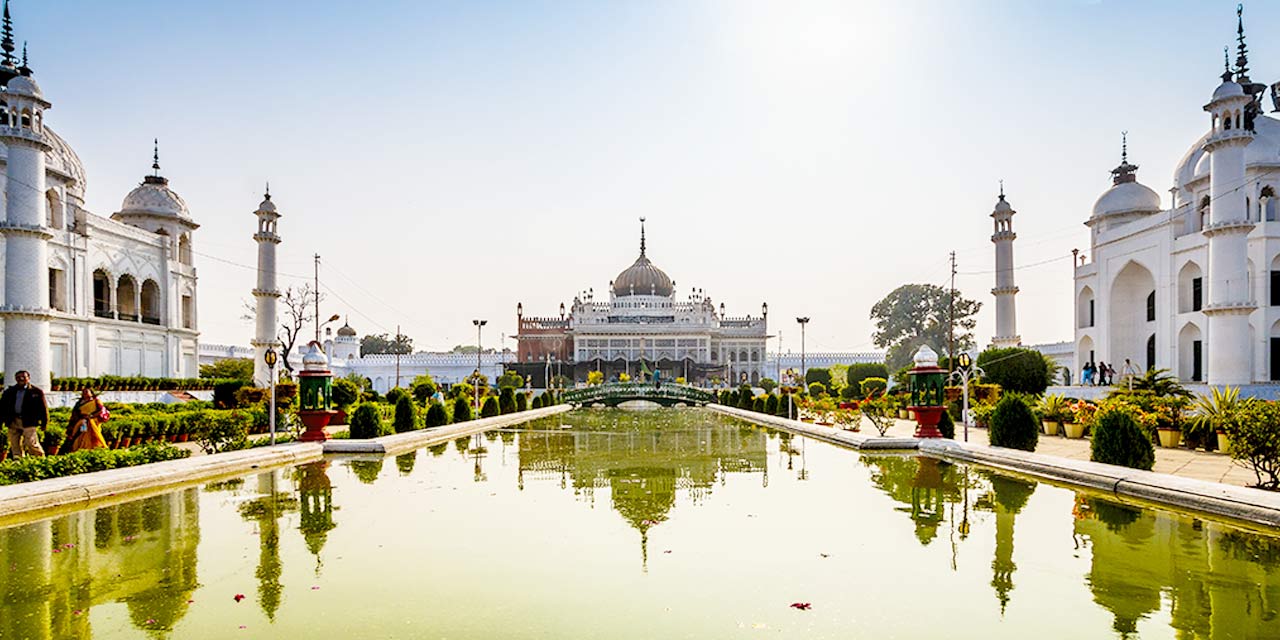 Chhota Imambara, also known as the Imambara of Hussainabad, is one of the most spectacular structures in Lucknow. During special festivals, particularly Muharram, the Imambara is exquisitely decorated with ornaments and chandeliers. Due to the lavish decorations of the monument during these events, visitors and writers from Europe during the 19th century had given this structure the apt designation of the "Palace of Lights."

It is a stunning synthesis of Persian, Indo-Islamic, and Charbagh structural and architectural styles. Quranic inscriptions are inscribed in Islamic calligraphy on the monument's walls to decorate its façade in full. 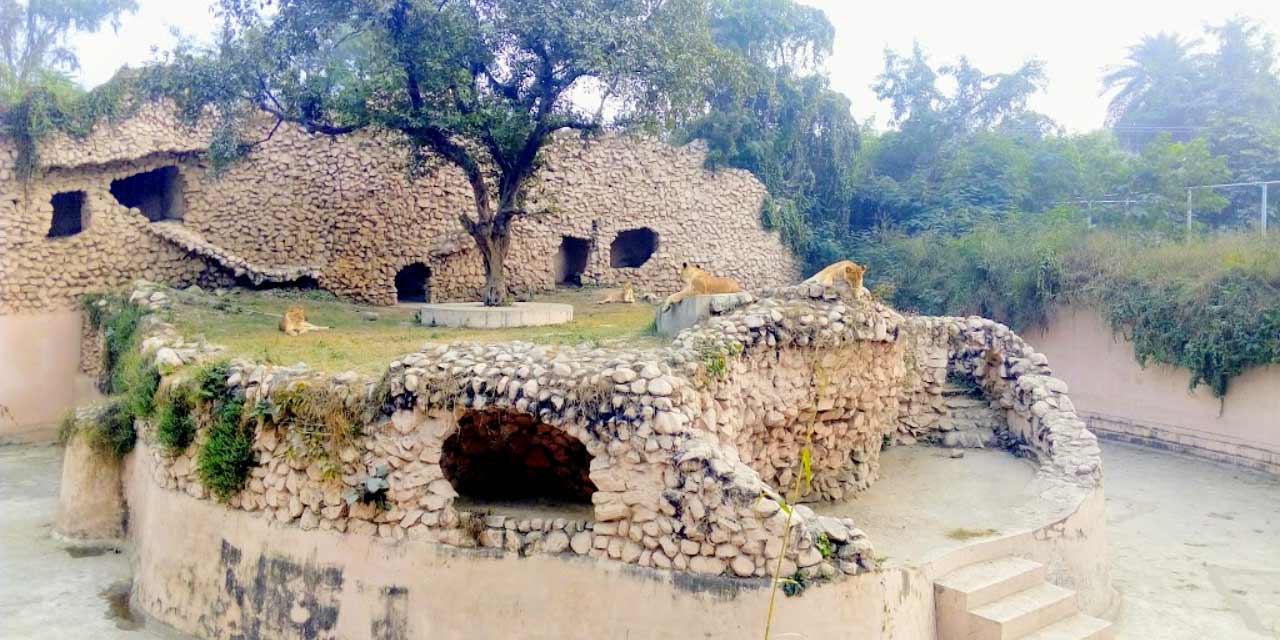 The Lucknow Zoo is a popular tourist destination in the city and is situated near the River Bank Colony. It was formerly known as The Prince of Wales Zoological Gardens and is now called the Nawab Wazid Ali Shah Prani Udyan. The royal Bengal tiger, white Bengal tiger, Himalayan black bear, and Asiatic lion are among the prominent mammals, birds, and reptiles that can be found at the Lucknow Zoo. The 71.6-acre zoo was built by Nawab Nasiruddin Haider in 1921 to celebrate the visit of the Prince of Wales in Lucknow. The zoo also has an exciting toy train. 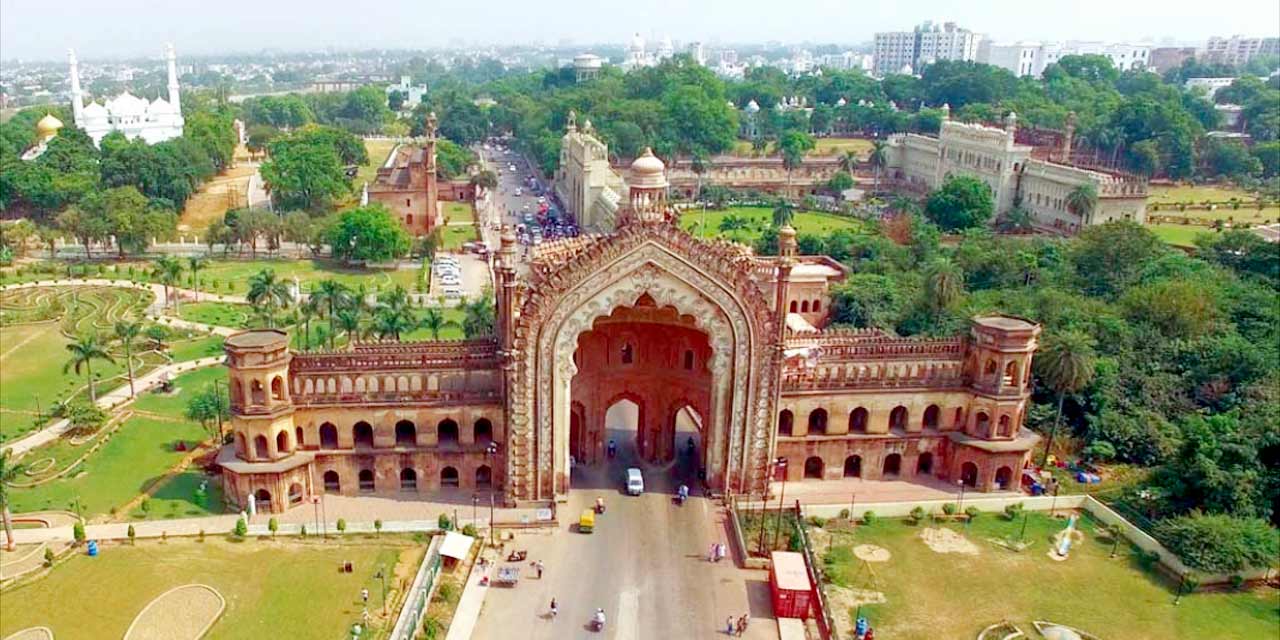 A magnificent doorway in Lucknow's old city, the renowned Rumi Darwaza stands sixty feet tall. It is a piece of historic Awadhi architecture located between the Bara Imambara and the Chota Imambara. The Turkish Gate was constructed by Nawab Asaf-ud-Daula and is so named because it was modeled after Turkey's Bab-i-Humayun entryway.

Rumi Darwaza was established for highly altruistic reasons. The then-Nawab of Lucknow devised a strategy to feed his people during the famine that ravaged North India in 1748 while also providing them with something to remember and be proud of. The huge Rumi Darwaza was constructed for him in accordance with the plan by the Awadhi laborers in exchange for daily meals. 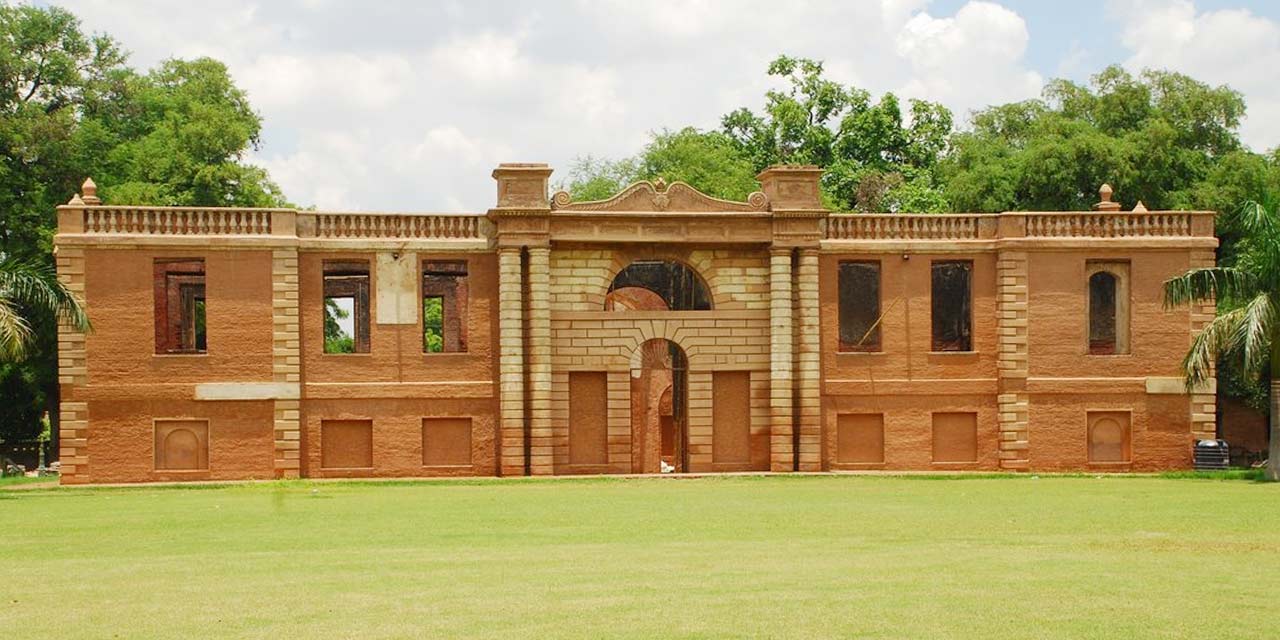 The Dilkusha Kothi located on the banks of the Gomti river is a relic of colonial India from the early 19th century. It was a former hunting lodge transformed into a summer home for the royals. The edifice was originally an English general’s home, Major Gore Ouseley. Nawab Nasir-Ud-Din-Haider further renovated it.

The 1857 Indian Independence War had a significant impact on this Baroque-style building. The building is currently just a ruin with a few towers and walls remaining. Additionally, the Dilkusha Kothi is close to a beautifully maintained garden, making it a wonderful place to picnic. 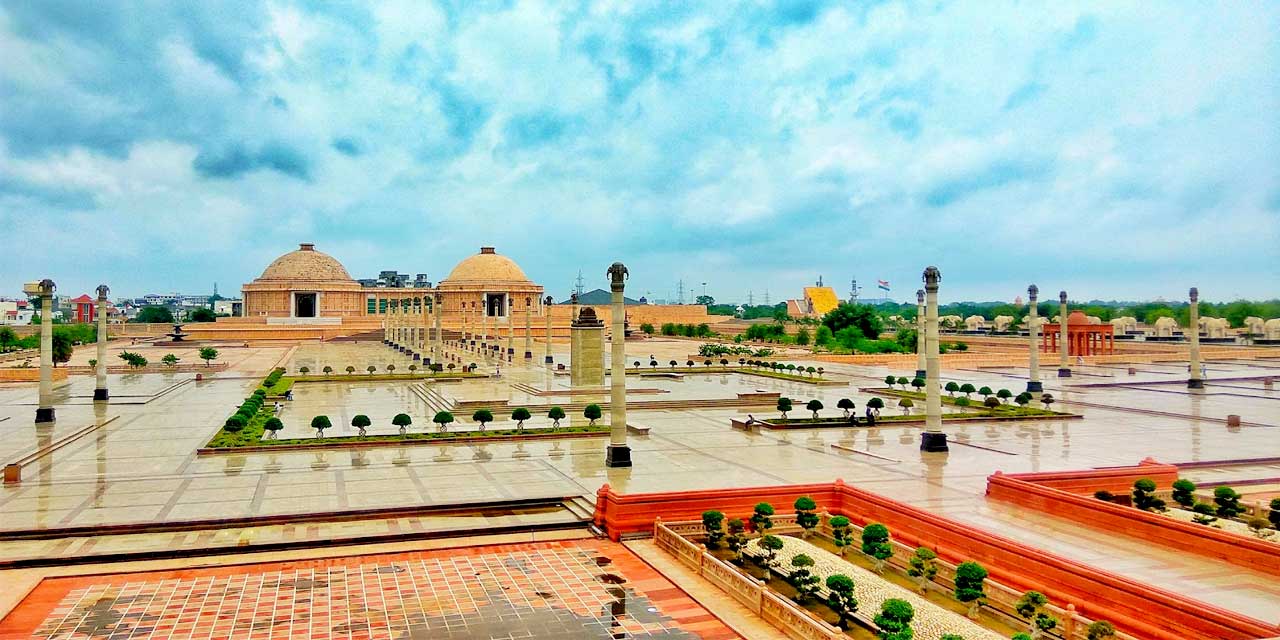 Initially known as the Dr. Bhimrao Ambedkar Samajik Parivartan Prateek Sthal, the Ambedkar Memorial Park is located in Vipul Khand of Gomti Nagar. It was constructed by the state government under the leadership of the then Chief Minister of the state Ms. Mayawati as a tribute to Dr. B.R. Ambedkar. Although it is not as green, the park houses various statues and structures of great historic importance. The park also honors the lives and memories of Jyotirao Phule, Narayana Guru, Birsa Munda, Shahuji Maharaj, and Kanshi Ram. In addition to the statues, the park also has statues of 124 monumental elephants. 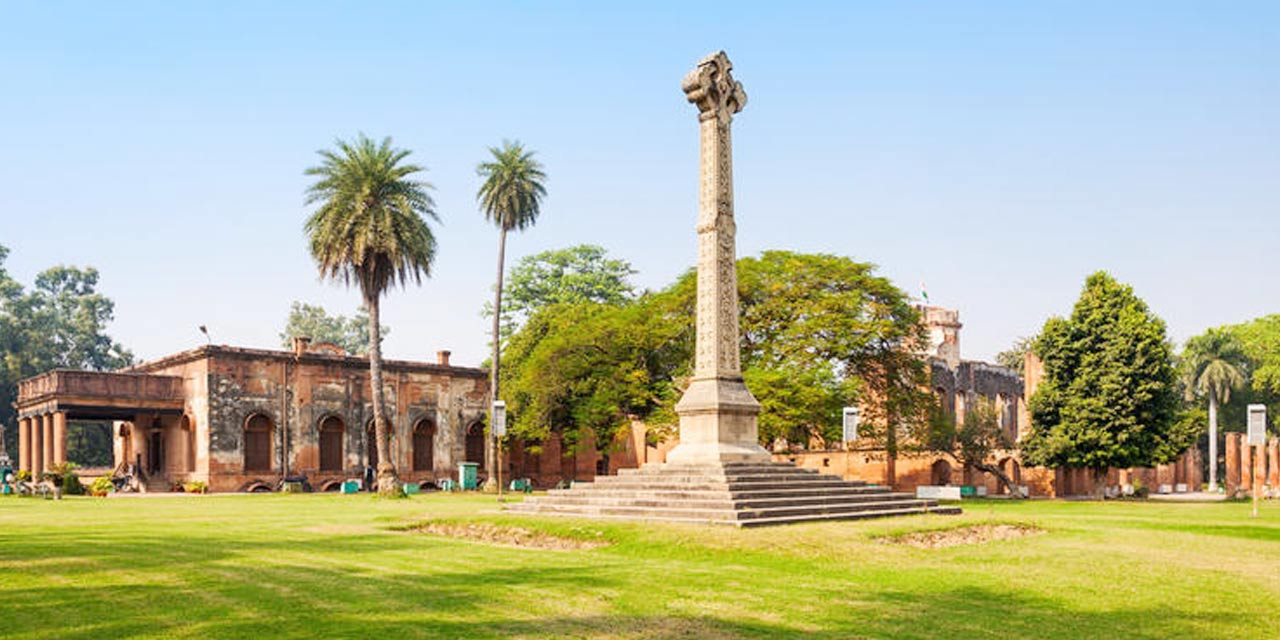 The British Residency of Lucknow, which doubles as a residential complex, functioned as the British East India Company's generals' base of operations. However, following the 1857 uprising, this once-composed edifice served as a camp for British refugees. This historical location in Lucknow is surrounded by lovely gardens and lawns and overlooks the River Gomti.

The fort is now in ruins, and close by is a British cemetery where all of the colonizers who died during the siege of Lucknow are buried. The Indian Archaeological Survey is now responsible for the management of the complex. Every evening, The Residency also stages a light and sound show commemorating the 1857 Uprising.

There are several other tourist attractions in the region, you can also plan a visit to other places in Lucknow such as Shah Najaf Imambara, Hazratganj Market, Firangi Mahal, Chattar Manzil, Indira Gandhi Planetarium, Chandrika Devi Temple, Husainabad Clock Tower, Moti Mahal, and Ramakrishna Math.

If you wish to visit a few places near Lucknow on your Lucknow Darshan Package tour, then you can choose to visit places such as Bithoor (72 km), Anandi Water Park (14 km), Nawabganj Bird Sanctuary (39 km), and Dewa Sharif (31 km).

Enjoy a Nawabi vacation with our customized Lucknow Darshan Packages. Contact our travel experts now to see the best of Lucknow!

Places to Visit in Lucknow